I am supportive of the right of women to have autonomy over their bodies, I don’t believe that it’s the duty of the state to own a women’s body and dictate her rights.I would hope that where appropriate, others in the immediate family would be consulted on the matter. I also am not blind to the the arguments against my position, I’m fully aware it’s a highly emotional subject.

I find the notion that a woman should be forced to give birth after being raped and made pregnant extremely distasteful. Additionally, this is not really a debate about “abortions vs no abortions”, it’s about whether we will provide SAFE abortions. Making something illegal doesn’t ban it completely, it forces people to go underground. Illegal abortions would still be undertaken, putting the women’s life at major risk and fuelling a criminal endeavour.

I support the current British law on abortion rights and would like to see Northern Ireland have equal rights in this area. It is the case that forcing a woman to bring a child into a world where the mother may be in extreme poverty, or unable to care properly for the child for any number of reasons, extremely reduces the chances of that child having a quality of life. To be clear, I obviously don’t support poverty and we should be doing all we can to eradicate the tragedies of homelessness, rough sleeping and poverty. My idealism, however, also has to give rise to the facts of the world around me – especially in developing countries. 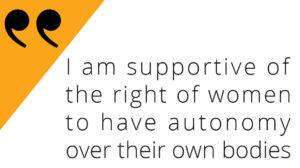 I believe it is right that money from International Aid budgets of wealthy countries or charities can be spent on funding abortions in developing countries. This should be in addition to spending money on matters like education around contraception (which also helps cut the spread of HIV and other STDs’).

However, I would not vote to allow banning of peaceful dialogue between countries, to argue for or against abortion. I wouldn’t be comfortable in not allowing countries, governments and their peoples and NGOs to express their thoughts, whichever side of the debate they are on. Part of building dialogues between countries and people is about allowing free expression in debating important topics. Abortion is highly emotional, and such debates can get very heated, but I wouldn’t like to see us shy away from engaging in debate.

<— Back to main AskLee page