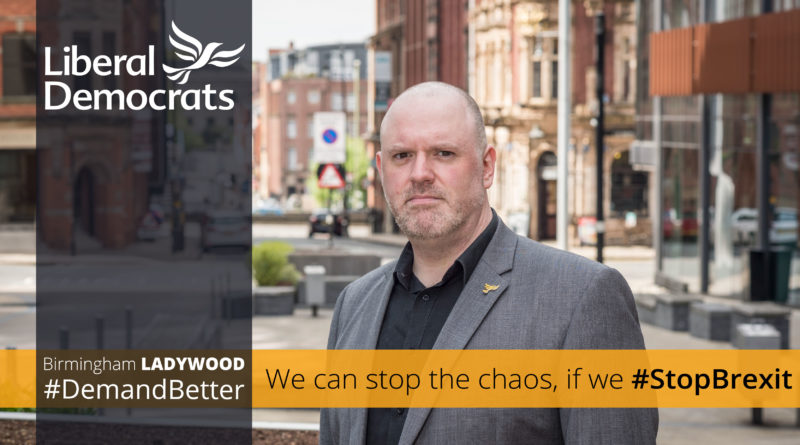 “Time and time again we hear of more damage just waiting to be caused by Brexit – worsened by the the threat of crashing out with a disastrous No Deal. A disaster that the current shameless, law-breaking government seems obsessed with pursuing.

“Hosting the Commonwealth Games in Birmingham was always going to be a challenge, but an impending Brexit looks set to wreak more havoc, this time on a major sporting event due to be hosted by our city.

“The Tories care not for the damage Brexit will cause, and the best that Labour offer is their own version of a damaging Brexit.

“This is yet another example of possible severe economic and social damage to our city and country, fuelled by Brexit. I regularly have people across Birmingham Ladywood tell me they are fed up with the mess we’re in and want the chaos to end.

“The Lib Dems are clear that the only way to stop the chaos, is to Stop Brexit. At the soon-to-be General Election, vote Liberal Democrat to stop Brexit and stop the chaos. We will then set about remaking our economy to serve people and planet, not just the vested interests of the worn-out Labour and Tory parties.”

For the first time the Commonwealth Games organisers deepest fears about the impact of Brexit have been laid bare as a result of a Liberal Democrat investigation.

The Games’ organisers state that there is a risk that the UK’s EU Exit will negatively affect Games deliverables, by changes to Government policy, economic impacts across markets and industries. This could result in potential workforce attrition and cost inflation. They count this risk as the highest possible, 20 out of 20.

In another document, marked ‘sensitive’ from February, the organisers in a meeting with the Police and other bodies state that ‘Possible increases in crime and disorder that result in reprioritised staff to deliver ‘BAU’ services (e.g. civil disobedience requires more operational policing) resulting in less resource availability for Games activity.’

In addition, they state that there is a risk that post EU Exit, public support for the games ‘will diminish’ as other priorities take precedence and Games messages are lost or fail to cut through as Brexit dominates the media narrative. ‘This could impact on Licencing, Sponsorship and Ticket Sales revenues.’

The organisers also have fears over a potential lack of available workforce. They state that they use suppliers that have traditionally relied upon small numbers of EU workforce to supplement their UK-based workforce for the 10 day period of the Games. If they are no longer permitted to employ EU workers without a visa, this could result in a shortage of resources and/or a delay to recruitment to fill these roles or inflate the market price. They also state that EU nationals might not want to stay in the UK post Brexit and identify that there could be the difficulty of replacing “like for like” in areas that are very industry-specific.

A big risk, according to the organisers is that Brexit may introduce adverse volatility to foreign exchange rates impacting several suppliers that are expected to invoice in foreign currency. This could result in a fluctuation in these costs. Suppliers may face increased costs or supply chain challenges to in delivering the Games.

“It is utterly shocking that the government’s deadline day dash towards Brexit could impact on the Commonwealth Games. All the effort, money and hope invested in the games are at risk due to Brexit. These documents outline the organisers darkest fears and highlight the damaging impact of Brexit, and how it is infiltrating all areas of our society.

“From spiralling costs, difficulty in securing visas for athletes, and a potentially depleted workforce, the Conservative government are putting events of cultural and economic significance at risk.

“We cannot underestimate the seriousness of this. It is the biggest sporting event in the UK since the Olympics and it risks being derailed due to Boris Johnson’s inability to govern responsibly.

“The Commonwealth Games should not be the collateral damage of the Brexit nightmare that Boris Johnson has unfortunately made our reality.”