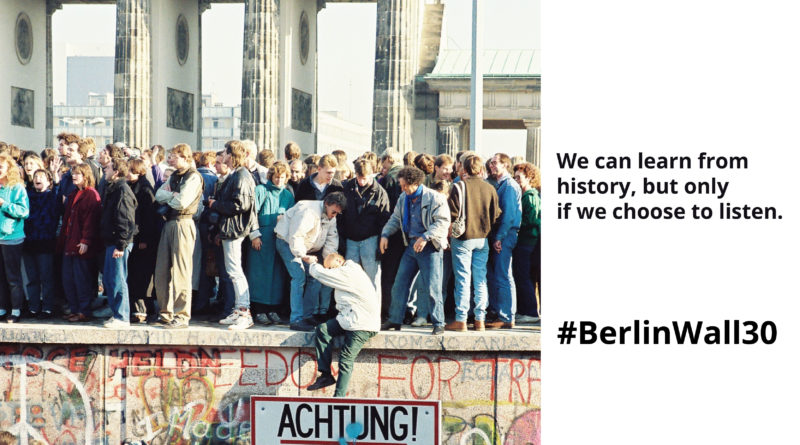 I was living in Germany in September of 1989, just about to move back to the UK to live, with my father receiving his final posting, in the RAF.

I vaguely recall reports on the TV, in Germany, about (what I’d now call) unrest. It was memorable, as it was mentioned so much. I didn’t understand what was going on, being 11 and more interested in toy cars and Lego, but I was soon to learn a lot more. After returning to the UK, it was odd to see almost the same pictures for the same stories – how odd, why would what’s going on in Germany matter to the UK?

I remember seeing stories of the wall coming down. I recall seeing people kicking, punching and ripping up, whilst also jumping on, the wall. I still didn’t really understand what I was seeing in terms of all the history, which led to the creation and eventual fall of the wall. I do vividly remember one thing – the look in people’s eyes as they stood on the wall, some of them with chunks of the wall in their hand.

The look was less about one emotion, but more of determination. Of achieving something. Of being, to use the phrase, “fit to burst” with a plethora of emotions. It’s a look I’ve not seen since, despite the high emotions around political issues at the moment.

Without going into the history of the Berlin wall here, the physical and literal bringing down of a wall still resonates to this day. Build a wall, or bringing back old borders doesn’t just kerb or take away the freedom of people, it damages or stops the mix of culture, language, food. Whilst living in East Germany can still mean that you are poorer, with lower wages and a higher risk of poverty than those in the West, leaving the wall up would surely have kept things a lot worse, with the ultimate freedom – freedom from the state – still being denied if separation was still in place.

Building walls occurs in politics, and the often-toxic nature of political argument in Britain is deeply troubling. An echo chamber can only exist by building walls around the echo, so that you don’t have to hear opposing views, that allow you to be challenged in your thinking. But, sometimes, such as in a crisis, walls can temporarily help to shield you from further trauma. But leaving them up permanently can cause a lot of distress and problems that are left unresolved.

Walls, whether figurative or literal, whether physical, mental or digital, are there to to divide. They divide people, divide communities, divide ideas and stagnate or reverse progress. Protection can be a useful function of a wall, but the line between protection and oppression, especially when an illiberal State is involved, is extremely hazy. When the line is cross, we should rise up and pull the wall down, together.