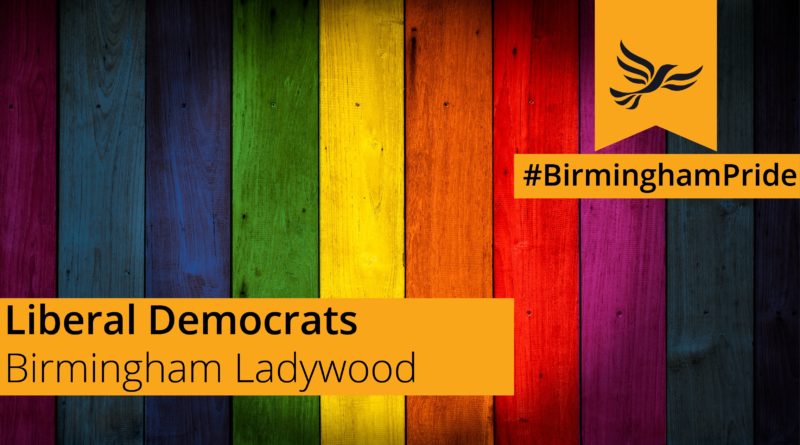 Ladywood Liberal Democrats will be proudly hosting a stall at Birmingham Pride , on May 26.

Liberals, and then Liberal Democrats, have been fighting for equality for decades, when the Liberal Party was the first to call for a Homosexual Equality Law.

Liberalism is a belief that the individual should be given the freedom to express and develop themselves as they want, providing they aren’t harming others. Being LGBT+ should not prevent you from self-fulfilment, yet we do not have full equality yet, although Liberal Democrats are continuing the fight to achieve this! 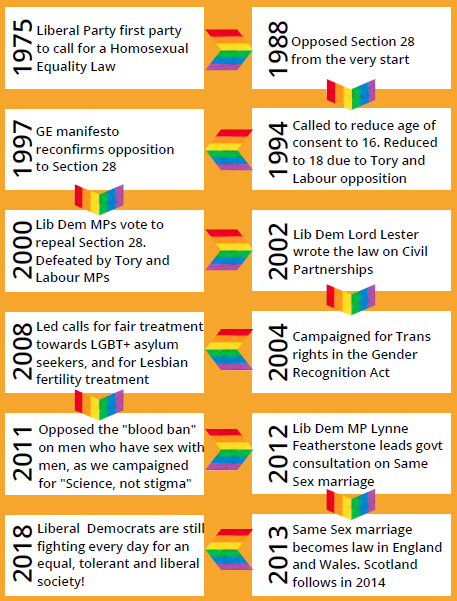 As you can see from the image, which is not a full list, we have been tirelessly campaigning for equality for LGBT+ people – leading right up to the introduction of Same Sex Marriage in 2013. We still have work to do to ensure equality around marriage legislation – including removing the Trans Spousal Veto, and also bringing in Civil Partnerships for opposite-sex couples too).

Also key for LGBT+ people is our work on mental health – both reducing stigma and working to increase service provision and fair access to treatment.

In Wales, schools will have SRE lessons inclusive of LGBT+ relationships, thanks to a Liberal Democrat – Kirsty Williams – being the Education Minister.

We can be proud as a Party, and a country, of how far we have come, but we must recognise we have much still to do in the world of LGBT+ rights. From ensuring full equality under the law, protecting the most vulnerable in our communities and ending the scandal of how LGBT+ asylum seekers are treated.

So when you’re getting a rest from dancing, come along to the stall, find out what we have been doing and what we are working on now – and, importantly – let us know what your priorities are!

Most of all – enjoy the amazing city of Birmingham and have a great Pride!