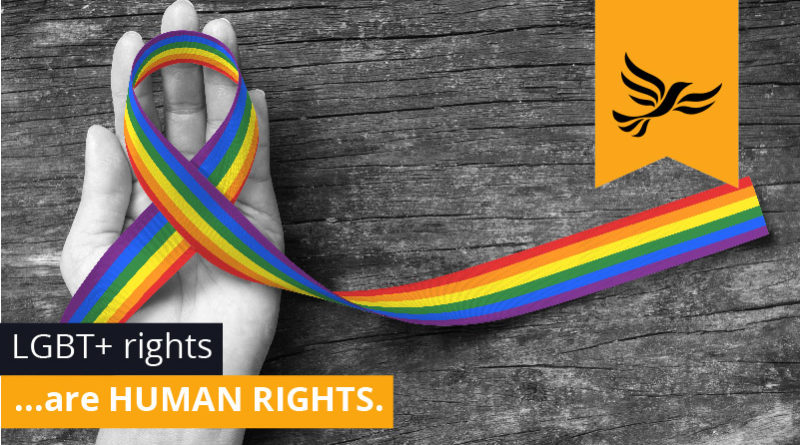 Below is an article by Lee Dargue, the Liberal Democrat spokesperson for Birmingham Ladywood, on the matter of discussing same-sex couples in schools.

“I recall discovering my sexuality, as a gay man, in my early teens, and I had no idea, that the school I was at, with teachers who had a role in my development as a person, was legally forbidden to talk about anything to do with my sexuality. I didn’t come out until the age of 19, and the suppression and denial has undoubtedly contributed to the depression and anxiety I still try to manage at age 40.

“Growing up as a child or teenager is often very painful and confusing. Which is why schools have a key role in helping young people understand the world around them. This must include discussions about different cultures, backgrounds and ideas, so that young people are more prepared to navigate the future that lies before them.

“I of course acknowledge that parents with concerns have the absolute right to voice their concerns, in a peaceful and responsible manner. What I do not accept, is for the reality of existence of same-sex couples to be hidden from children. There are some who claim by merely mentioning same-sex couples, that it is “promoting homosexuality”, which is not the case. It’s also true that some of the children who will learn about this matter, may be LGBT+ themselves, and thus seeing exclusions called for, could be highly damaging to their development at such a vulnerable age.

“Teaching children the realities of the world around them, in an age-appropriate way, is simply helping to prepare them not to fear people who may be different in some way. You are not “promoting homosexuality” by talking about same-sex couples. To suggest this is direct proof that more education is absolutely needed, because the key starting point is that same-sex couples are not limited to homosexuals.

“I was proud that my party, the Liberal Democrats, led Parliament in legalising same-sex marriage in England and Wales during the coalition government. So, whilst the claim that you can change someone’s sexuality with a conversation in a classroom is just plain wrong, it’s also a simple truth that the law allows for same-sex marriage. So, it’s very strange to think that some people believe the teachers should have it dictated to them that something which is legal, can’t even be discussed.

“It’s also the case, that there aren’t weeks and weeks of discussions about this one subject area – it’s a wide-ranging topic, that also includes teaching about the various religions. I’ve not heard those complaining about the same-sex marriage discussion taking issue with any other subject area, so choosing to focus solely on same-sex marriage suggests intolerance or even condemnation of LGBT+ people.

“Having previously stood in Birmingham Edgbaston in the 2015 General Election, I was questioned several times about section 28 (s28) – that seat was formerly of Jill Knight, the architect of the insidious legislation. I was largely praised for my very strong stance against ever returning to this kind of approach again. LGBT+ people face enough hurdles in addition to the normal difficulties of growing up, including higher prevalence of mental health issues. We don’t need government and politicians adding more hurdles.

“I have not heard anyone call for s28 to come back during this particular debate in Birmingham, but the slippery slope is easily slid down. We must be open, honest and listen to all voices on subjects like this. What we cannot do is suppress the truth, in an area that touches upon the question of someone’s very worth in society. We are all humans and have an equal right to be treated fairly.

“When it comes to censoring talk in schools around sexual identity, we’ve been down this path before. It’s a dark, unforgiving and hugely damaging path, one which was blocked off, and must remain so. LGBT+ in Ladywood, and across Birmingham, are part of our richly diverse community and I will not support pressures to block schools in their discussions with children around matters such as same-sex marriage.

“LGBT+ people in Birmingham are already facing huge issues around accessing proper support for various physical and mental health needs. There are huge questions surrounding the future of Hurst Street, that no-one seems to be standing up to protect. And now we face the prospect of schools being pressured to erase the fact that same-sex couples even exist, as somehow it might “turn” children.

“The main response to this currently seems to be a technical discussion around consultation. I for one refuse to support any consultation findings that require censorship of schools in matters of LGBT+ discussions, which are delivered in an age-appropriate way. Equally, I believe the same children need a wide-ranging education on the different religions, so I wouldn’t support that staying included too. Banning LGBT+ discussions under s28 was a horrendous stain on our country and the law making it happen was consigned to the dustbin of history, and there it must stay.