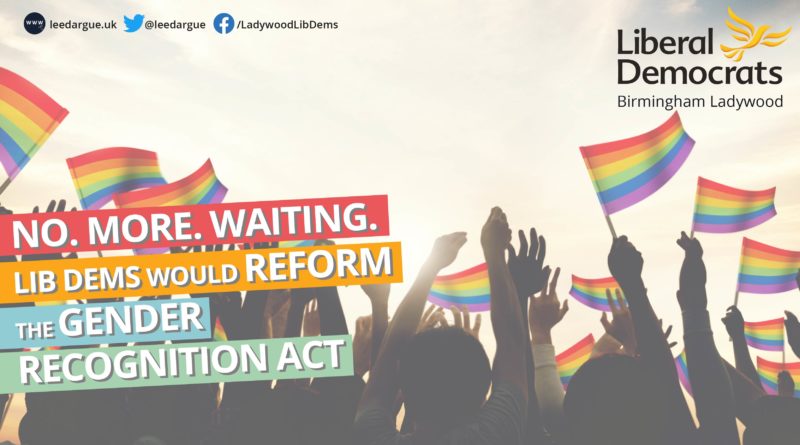 The Liberal Democrats have announced that they will implement reform of the Gender Recognition Act as a priority, after the Conservative Government failed to bring forward measures despite promises to do so.

Under the plans, to be included in the Liberal Democrat manifesto, the Act will be amended to make the gender recognition process simpler and fairer, by:

The Conservative Government promised in 2017 to reform the Gender Recognition Act and held a public consultation on the proposals in 2018. The consultation closed more than a year ago – on 22nd October 2018 – but Conservative Ministers have not published their response to the consultation or brought forward the reforms.

Last month it was reported that the Conservatives had “shelved the plans” and intended them to be “kicked into the long grass”. In response to a question from Liberal Democrat Christine Jardine urging her to implement the reforms, Minister for Women and Equalities Liz Truss told the House of Commons “I will not be rushed into it”.

“When transphobic hate crime is at a record high, Lib Dems refuse to accept the Conservatives or any other government dragging it’s feet any longer.

“For too long, LGBT+ people have been told to be patient, to wait, that they will get rights soon. This is unacceptable, and we say – NO. MORE. WAITING.

“A Liberal Democrat government would reform the Gender Recognition Act, and run departments with a core principle of ensuring every person’s rights are respected, including expression of their gender identity.”