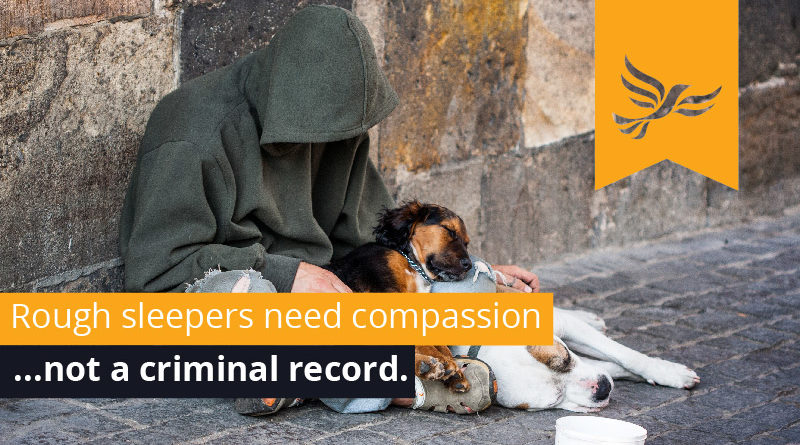 The Liberal Democrats have today called for a change in the law having revealed 646 people were found guilty of rough sleeping under the Vagrancy Act (1824) across the West Midlands, between 2014 and 2017.

Lee Dargue, Birmingham Ladywood spokesperson for the Lib Dems, supports Liberal Democrat MP for Oxford West and Abingdon, Layla Moran’s campaign. Layla is working to end the criminalisation of rough sleepers and said the Conservative Government should be “ashamed”. Layla has called for MPs to support her Vagrancy (Repeal) Bill 2017-19.

The figures from the Ministry of Justice, uncovered by a Liberal Democrat Freedom of Information request, show a total of 6,518 ‘offenders’ were found guilty under the Vagrancy Act (1824) across England and Wales between 2014 and 2017.

“This Conservative Government should be ashamed that they have continued to allow the use of a law that makes rough sleeping a criminal offence, and for it to be used with such little regard for the people afflicted.

“This law was controversial 200 years ago, and it has no place in a modern, compassionate society. I urge all MPs to back my cross-party campaign to scrap the Vagrancy Act and bring an end to the law criminalising and degrading our most vulnerable.”

“Moving people on, issuing fines and putting vulnerable people in prison cells should be a source of shame. People deserve better, and the Liberal Democrats demand better.

“I want to see a society that cares for those that have fallen on hard times and treats them with compassion, not cruelty and condemnation.

“It is time that this archaic act from the Nineteenth Century was repealed, and replaced with care and real support for vulnerable people.”