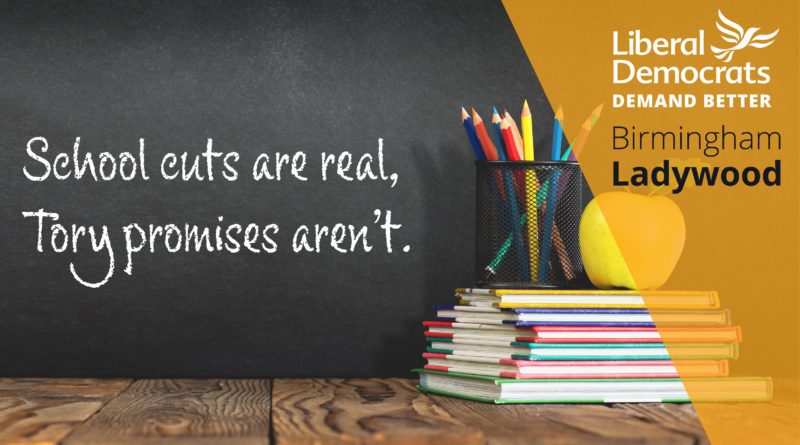 Responding to the relaunch of the National Education Union’s ‘School Cuts’ website, which reveals that more than 15,000 schools will have less money per pupil in real terms in 2020 than they did in 2015, Liberal Democrat Parliamentary spokesperson for Birmingham Ladywood, Lee Dargue, said:

“Our children continue to be failed. The Conservative and Labour magic money trees won’t deliver for schools in Ladywood – only real cash, from a Liberal Democrat government, will.

“Whilst Mr Johnson peddles meaningless soundbites, teachers are still faced with impossible decisions on which support staff to cut, which basic supplies not to buy or which days to cut short.

“The money suggested in the Spending Round wouldn’t reach schools until September 2020. However, these claims on funding for public services by this lacklustre and divisive government are just fairy tales.

“Liberal Democrats demand better for our children’s futures. We need an emergency cash injection immediately, to reverse school cuts, so that teachers have the resources they need to help their pupils succeed.

“Real cash for schools is what a Liberal Democrat government would deliver, after stopping a chaotic and damaging Brexit which is all that is on offer from both Conservatives and Labour.”

According to the National Education Union, “the funding crisis continues next year” for 81% of schools in England. They estimate that 15,684 schools will have less money per child in real terms in 2020 than they had in 2015.