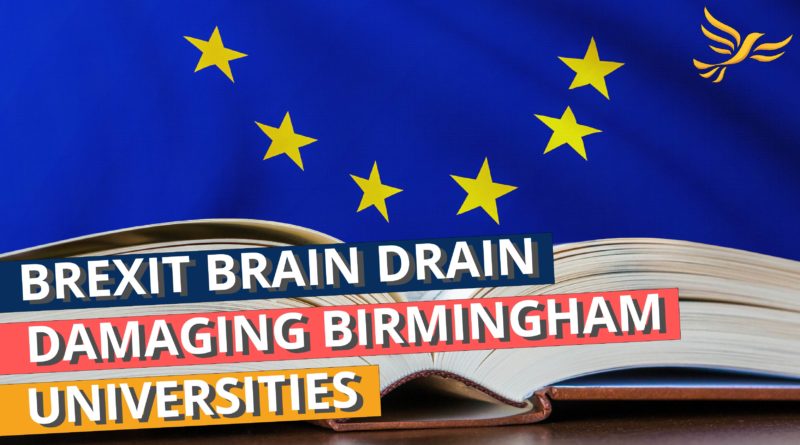 Almost 100 EU academics from Aston and Birmingham City Universities, in Ladywood, have left in the three years since the Brexit vote, research by the Liberal Democrats has revealed.

42 academics from the EU left the two Ladywood universities in 2018/19 alone, with 95 since the EU Referendum was called, the figures show.

The analysis, based on Freedom of Information responses from 81 universities, shows that across the country 4,014 EU academics have left UK universities in 2018/19.
The Liberal Democrats said the figures reveal that uncertainty across Birmingham Ladywood over freedom of movement and international research funding is leading to a “Brexit brain drain.”

Academics face uncertainty over both their immigration status and their funding following Brexit, meaning the UK risks becoming less competitive in attracting global talent. Previous analysis by the Royal Society has shown that the UK’s share of total EU research funding has already fallen from 15.8 per cent (€1.49bn) in 2015 to 11.3 per cent (€1.06bn) in 2018.

The findings are also consistent with recent research by the higher education industry body Universities UK which reported that 60% of universities surveyed believed they had lost existing or potential staff members to overseas institutions because of Brexit.

“It is deeply concerning that Brexit chaos has been instrumental in driving almost 100 talented academics to leave universities in Birmingham Ladwyood. We must do everything we can to stop our universities from being threatened by this Brexit brain drain.

“Jeremy Corbyn can’t make a clear commitment to free movement, and said we’ll have to ‘wait and see’ what he thinks about Brexit until after the election. Our country can’t afford to wait any longer.

“The Tory party has adopted the xenophobic rhetoric of Nigel Farage, making our colleagues, friends and family from the EU feel unwelcome. The situation risks being made even worse by Boris Johnson’s reckless promise to crash us out of the EU by 2020 no matter the damage.

“The Liberal Democrats have always been clear about opposing the damage Brexit would cause, on top of the damage we’ve already seen following the last three years of chaos. The Lib Dems are the only party that can still stop Brexit and protect our universities, which are so important to young people, research, local jobs and prosperity.

“It’s not too late to change direction, by voting Liberal Democrat, to prevent a Tory or Labour Brexit from causing further damage to Birmingham Ladywood and it’s people.”